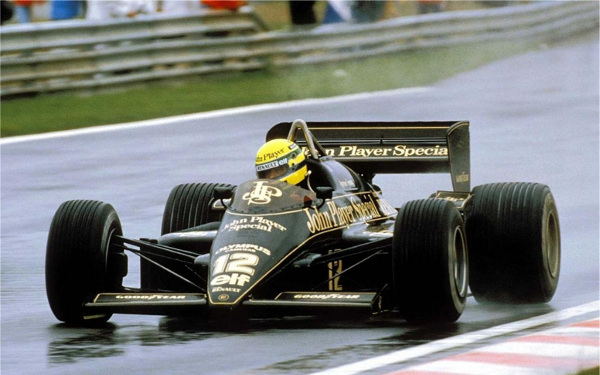 The Lotus 97T was a Formula One racing car designed by Gérard Ducarouge and built by Team Lotus. A development of the Lotus 95T of 1984, it was designed for the 1985 Formula One season by French engineer Gérard Ducarouge. The 97T was powered by the turbocharged 1.5L Renault engine which produced approximately 900 bhp (671 kW; 912 PS) for races, while the Renault's special qualifying engines were reported to produce over 1,000 bhp (746 kW; 1,014 PS). Sponsorship came from John Player Special, French oil company Elf (the official oil of engine supplier Renault) and Olympus Cameras, while the car used Goodyear tyres.

The 97T was a simple design, but was robust and with the powerful Renault engines, it was fast. It used elements from the defunct Lotus 96T Indycar project in the aerodynamics with another innovative piece of Lotus design: an early form of bargeboards. These were placed between the front wheels and the side pods improving airflow around the side of the car. Ducarouge also got around the ban on the 'winglets' seen on the rear wings of the 1984 cars by placing them instead on the rear edges of the side pods.

The 97T was very competitive during the season, taking 8 poles, 7 with Senna and 1 with De Angelis, and 3 wins. Senna's first was a brilliant performance in the Portuguese Grand Prix where he won by over a minute in monsoon conditions. His second came in the Belgian Grand Prix at Spa, held in wet/dry conditions. De Angelis added a third win (his 2nd and last win in F1, both for Lotus) at the San Marino Grand Prix after original winner Alain Prost (McLaren) was disqualified an hour after the race finished due to his out of fuel McLaren-TAG being 2 kg underweight.

The 97T was fast, but rather unreliable. Although it was clearly the best car on slow and tight circuits like Monaco, Detroit and Adelaide, the Renault engine had only decent reliability and it was not as powerful as the BMW or Honda engines, but about on par with the Ferrari and Porsche units. Senna in particular had a run of bad luck mid season, including a huge crash at in the French Grand Prix at Paul Ricard, where he went off at almost 200 mph (322 km/h) going into the Courbe de Signes at the end of the 1.8 km long Mistral Straight; and he retired many times while leading which cost him a possible chance at the world championship. Eventually, Lotus finished fourth in the constructors championship.

The Lotus 98T was a development of the Lotus 97T of 1985. Of the four chassis built three were assigned to Ayrton Senna, now in his second year with Team Lotus, and one to team mate Johnny Dumfries. Designed by Gérard Ducarouge and Martin Ogilvie the chassis featured a lower monocoque than the 97T as a result of a regulation change stipulating a reduction in fuel capacity to 195 litres. The powertrain consisted of the new Renault EF15B turbo V6 engine driving through a six speed Hewland gearbox. 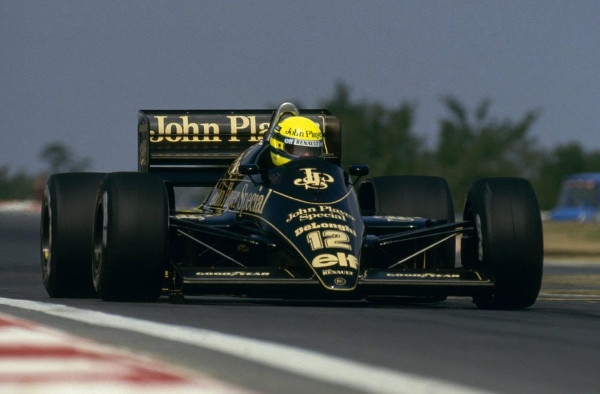 The EF15B was to appear in two forms, the standard engine and the "D.P." engine which featured pneumatic valve springs for the first time. At the end of the season Renault introduced the revised EF15C which in addition to the D.P. valve gear also boasted common rail fuel injection and much revised water cooling through the cylinder head reducing the likelihood of pre-ignition (detonation). Power figures for this period of F1 history are largely speculative as most engine manufactures freely admitted that their test beds would not have a sufficient power rating to measure the 1.5 litre turbos output at above 4 bar boost. It is generally accepted that the Renault EF15 produced between 1,200 bhp (890 kW) and 1,300 bhp (970 kW) at 5.5 bar boost.

The gearbox came in two variants, a conventional five speed and a new six speed. The six speed was very much a development gearbox and was largely unreliable. While Senna opted to run only with the five speed, Dumfries was tasked with testing the six speed. Both gearboxes featured Hewland internals within a Lotus designed casing.

Other notable innovations of the 98T included a two-stage ride height adjustment, water injection through the intercoolers, an early form of barge board (also present on the 97T) and an advanced (for the time) fuel consumption micro computer. 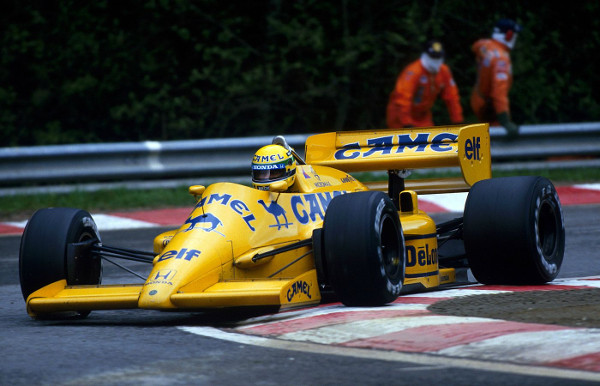 The Lotus 99T was a Formula One car designed by Gérard Ducarouge for Lotus for use in the 1987 season. After Renault pulled out of F1 at the end of 1986, Lotus signed a deal with Honda for use of their hugely powerful turbocharged 1.5 Litre engine, although due to Honda's already existing deal with the Williams team allowing them exclusive use of the 1987 spec Honda RA167-E, Lotus had to make do with the Honda RA166-E spec engine from 1986. As part of the deal, Lotus agreed to sign Honda's test driver Satoru Nakajima as team mate to the mercurial Ayrton Senna. Nakajima, who many felt was only in F1 because of his nationality and because of Honda, brought little to the team other than Honda.

The 99T proved to be competitive in Senna's talented hands, the Brazilian won twice and scored six other podium finishes during the season. The car was very good around slow and bumpy circuits like Monaco and Detroit (where Senna won both his races that year). This helped him and the team to third in the drivers' and constructors' championship. Senna also provided a poignant footnote that season, as his win at the United States Grand Prix was the final ever Grand Prix win for the team that Colin Chapman made famous. Senna would move to McLaren for 1988 and would win his first World Drivers' Championship. The season was also Senna's second worst in terms of pole positions, scoring only one in Round 2 at San Marino, his worst season being his rookie year in 1984 with Toleman.