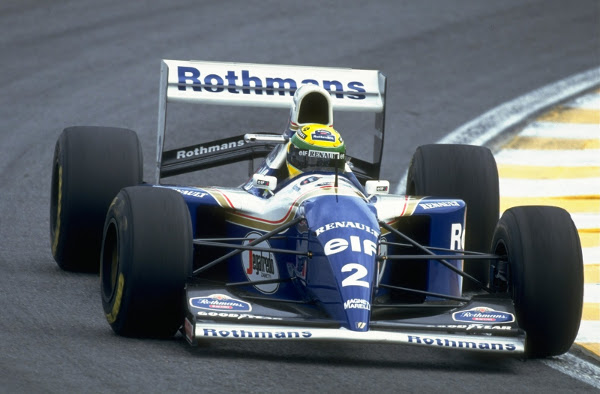 The Williams FW16 is a Formula One car designed by Adrian Newey for the British Williams team. The FW16 competed in the 1994 Formula One season and was used by British driver Damon Hill to finish runner-up in the 1994 World Drivers' Championship. Its engine was a Renault RS6 3.5 V10. The team's main sponsor was Rothmans, replacing Camel Cigarettes and Canon used on the FW14 and FW15C. The car was designed around the major regulation changes that the FIA had introduced in the off-season, banning the various electronic devices that had been used by the front running cars during the preceding two seasons.

The FW16 was a passive evolution of the FW15C that had preceded it. It featured revised bodywork, including a low profile engine cover; taller sidepods; enclosed driveshaft; and an anhedral rear wing lower element, which was previously hinted at on the FW15C. In addition to these changes, the FW16 featured an innovative rear suspension wishbone design, an improved version of the Renault Sport Formula One engine (RS6), and a fuel valve to enable the ability for mid-race refuelling (a rule reintroduced for 1994).

The car was shown to have severe shortcomings at its debut. The FW16 lacked the active suspension and traction control of the previous season's FW15C, yet was itself an evolution of a chassis that had been designed for and depended on these systems (FW15C). It suffered from a very narrow driveability setup window that made it difficult to drive until the modifications to become the FW16B. This could be seen when Senna, pushing to close the gap between himself and Schumacher, spun out of second place during the Brazilian Grand Prix, and by the identical spins in practice by Hill and Senna at Aida, with Senna commenting on the Aida practice spin: "I can't explain it. I was actually in one of my b est positions at that corner when it went. It looked silly and stupid but better it happens today than tomorrow."

Senna commented as follows on the FW16 during early season testing:

"I have a very negative feeling about driving the car and driving it on the limit and so on. Therefore I didn't have a single run or a single lap that I felt comfortable or reasonably confident."

"I am uncomfortable in the car, it all feels wrong. We changed the seat and the wheel, but even so I was already asking for more room." "Going back to when we raced at Estoril last September (on testing the passive Williams at the same track 4 months later), it feels much more difficult. Some of that is down to the lack of electronic change. Also, the car has its own characteristics which I'm not fully confident in yet. It makes you a lot more tense and that stresses you."