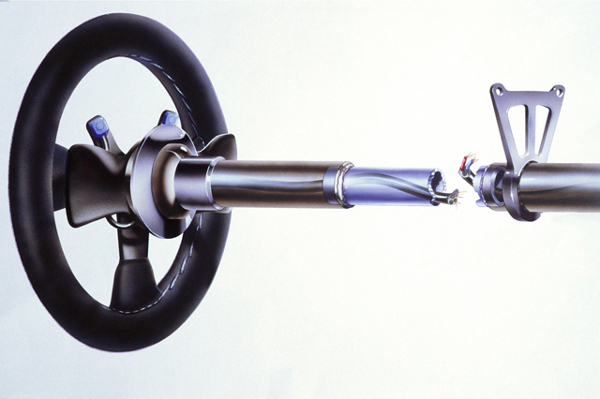 After years of doubts, now the truth about the death of Ayrton Senna was discovered and made public. The steering column has been changed before the race because the Brazilian was not at ease in the Williams: this manual welding didn't resist to the various efforts, so Ayrton couldn’t turn in the Tamburello curve.

Here there is the chronology of the events that occurred after the death of Ayrton, until the conclusion of the process. Many thanks to David Righida , the creator of www.ayrtondasilva.net , for the material about the process.

The weekly Autosprint formulates a disturbing hypothesis: the steering column of Williams may have succumbed before impact, leaving the car with no directionality. Patrick Head, Williams technical director, assumed that the out of the track was caused by a reduction on the gas pedal in a disconnection of the asphalt.

After the investigation about fatal accidents happened at Imola circuit, there are 8 suspects for Williams, 6 of Simtek, 3 of SAGIS (the company that runs the circuit) for complicity in manslaughter.

The experts of Pratica di Mare and the University of Bologna write in their report that the metal of the steering column of Ayrton bears signs of fatigue.

The video of the camera-car mounted on the Williams is sent to the prosecution, and subsequently it was made available for the media. Entrusted to Cineca for processing, this video will become crucial to the prosecution's case: in fact, the abnormal movement of the steering wheel will be visible.

Autosprint published photographs of the bloodied helmet of Ayrton, of the suspension that has perforated the pilot by killing him and of the changed and broken steering column.

The judge for preliminary investigations receives the documentation of the PM Passarini.

Just in time for the process, the Sunday Times publishes a photo of Paul-Henri Cahier who shows a possible cause of the Senna’s death, but it will never be taken seriously in the process.

The PM Passarini presents the version of the prosecution: Senna had repeatedly called for the modification of the steering column (for reasons of handling and visibility of instruments): the change was made with a metal extension of lower quality and with a smaller diameter than the previous one. The Williams defense denies his theory, but also pointing the finger againstthe safety of the circuit.

They listened to the first doctors who arrived on the crashsite, which confirm that they have not encountered any difficulty in extracting Ayrton by the car because the steering column was already broken and was not an obstacle. The defense insists in attributing the responsibility to the circuit and, in particular, to the state of the asphalt.

Pierluigi Martini says that the curve could give problems only to a car with many problems, more so if to drive it was Ayrton Senna. He says he does not know exactly what problem the car may have had, but he remembers that Ayrton talked to him about the nervousness which that car gave him.

Michele Alboreto believes that the accident was caused by a mechanical failure, always possible in F1. Moreover, he excludes that the fault may be due to the state of the asphalt. Two medical experts explain the causes of the death of Ayrton.

Only at this point the prosecution understands that to read the data from the black box of Ayrton in their possession, would also serve a date-card connection that the team has not even mentioned.

Passarini calls the two engineers Tommaso Carletti and Mauro Forghieri to illustrate the failure of the steering column. Instead, engineers Williams Giorgio Stirano and Diego Milen consider that Ayrton has started to lose control over this back situated few meters before.

Passarini openly accuses the FOCA to hide the evidence, and then he says that some of the video camera-car of Ayrton delivered to him were incomplete.

Damon Hill releases his testimony at trial: he says a long sequence of phrases like "I don't remember", "I'm sorry, I don't remember."." However, in his opinion too the car seems to go in the oversteer.

The television program "Process Senna" tries to make light on the inconsistencies and strange coincidences of this story: it is assumed the existence of a French engineer, who is in possession of the canceled data about the Renault.

It talks about of changes to the steering column.

Gary Woodward, engineer Williams says, that the steering column is checked after each race, and that of Ayrton was in good conditions before his accident at Imola’s circuit.

It's reexamined what the automotive brand “Williams” said the previous times. The professor Fanghella of the University of Genoa detects a discrepancy of 1.4 seconds, and he says that the simulation doesn’t take into account the corrections made by the pilot; there is also a link between the real position of the steering wheel and the steering wheel simulated. The engineer Diego Minen responds that the time lag is irrelevant.

The FIA confirms that no security problem was detected to the track during the control before the grand prix.

Frank Williams says he is not a technical and he doesn’t know cars technical details. Among other things, he says that after the incident, "We examined all the posts and they were fine. We decided, however, to improve the project and change the steering columns to remove any doubt as to their suitability. We want to understand what happened that day. "

The PM Passarini announces the appeal against the acquittals of Head and Newey, but not of others, including Williams himself.

The Supreme Court accepts the appeal of the Attorney General of Bologna, by canceling the acquittal of the vertices Williams "because the crime does not exist"; the Court of Appeal issues it in 1999. The appeals process, therefore, almost nine years after Senna's death has to be redone.

The second process of Appeals begins. The Attorney General Rinaldo Rosini reiterates the allegations in his indictment, in particular against Head.

Judgment of the second appeal process: the Court of Appeal of Bologna judges the aerodynamicist Adrian Newey innocent "for not having committed the crime" and establishes the "not to proceed" for Patrick Head, technical director of the Williams team. Therefore, the Court recognizes the prosecution's case and indicates the failure of the steering column as the cause of the accident.

The third section of the Criminal Court of Cassation rejected the request for a full acquittal made by the accused and confirmed the sentence of prescription pronounced against Patrick Head reiterating clearly the procedures and responsibilities of the incident. The lengthy legal action has finally come to an end.